Hot Soup! The Soup Battle Is Going Down Down Baby.

You can find me throughout the Twin Cities rolling on cooper tires (because dubs aren't my thing), sipping on a brew and and chowing on some food... Ok, fine I'll leave the rapping to Nelly and his Lunatics and stick to what I'm good at..... Eating and writing about food.

But, it's true, we have ourselves a friendly little battle over who has the best soups (and sandwiches) to offer from the fast convenience world, especially with the addition of a new restaurant that is set to open August 6th. That new restaurant, which we had an opportunity to check out during a VIP sneak peak, is Zoup! Located in Eagan, this new addition has joined the soup battle alongside the likes of Cafe Zupas and Panera Bread.

The real question now is - does Zoup! have what it takes to compete with these already established establishments? If you ask me, the answer is - ABSOLUTELY! And, after taking a little time to speak to the owners and a corporate representative about the concept and their products, they're super eager to prove their worth. So, let's brake it all down from our first visit and share with you how we think they compare against their competition.

Everyone knows Panera, they've been around for what seems like, forever. On any given day of the week, patrons are flooding this place during breakfast, lunch AND dinner. However, if you're going to ask me to share my perspective on the offers at Panera, they only have 2 things going for them. The first is their insanely awesome cinnamon scrunch bagel and the second is their famous broccoli cheddar soup. The crunch is pretty much the greatest bagel ever created while the broccoli cheddar is just as amazing, and I don't even like broccoli!

Cafe Zupas, which was new to the Twin Cities within the last couple of years and more and more locations are starting to pop up. This place is more in line with Zoup! - soups, salads and sandwiches. The main differences I see between these two businesses is preparation and the fresh made teas that Zupas has. We love the teas and the open kitchen concept allows patrons to see them preparing their fresh salads and soups being prepared from scratch daily.

As for the new guy, well they definitely have their own spin on things. What I enjoyed about Zoup! compared to the competition are their sandwiches for starters. I personally would order a sandwich from Zoup! before the other two locations. As for the soup options, you can't go wrong with their offerings and they rotate 12 daily.  During our VIP sneak peak, we sampled all of their soups and found none of them to be unpleasant, but we ended up ordering the lobster bisque and maple bacon ham and swiss. I chose a combination that was as close to "apples-to-apples" with what I've ordered with the other locations. 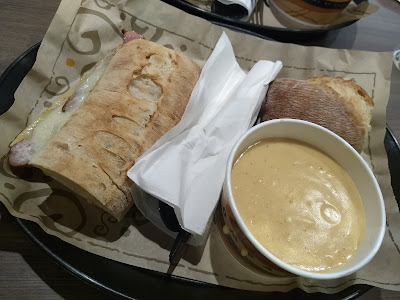 Their sandwich was easily better than anything I've had at Panera or Cafe Zupas and would keep ordering it during my future visits. As for that lobster bisque. Panera doesn't offer this, but Cafe Zupas does. Comparing the two of them side-by-side would have been best, like them equally. I like the flavor itself better at Cafe Zupas, but I love the huge lobster chunks and thickness of  Zoup's. My wife had the bisque as well and went with a simple chicken and bacon cobb. While the salads are not quite like those found at Cafe Zupa, it was still tasty and it's simplicity may resonate with some individuals. 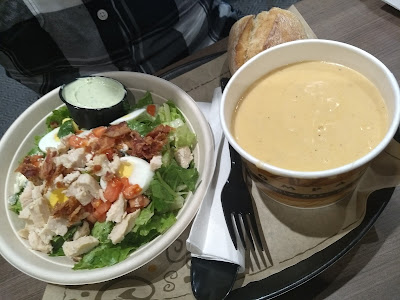 There are certainly similarities between all three restaurants, but they each also have their own uniqueness as well. I enjoyed the food at Zoup!, I also enjoy some of the offerings at Cafe Zoupa and I can never say no to a warm cinnamon crunch no matter what time of day it is. I want to try more items on the menu at Zoup's after I was intrigued by other soups during my sampling. I would encourage you to get the bisque (and the sandwich I had), but if seafood isn't your thing, I enjoyed these other options as well; the mac n' cheese, pot pie, Jamaican gumbo and chicken tortilla.

While you're there, feel free to join in on the fun when they're swapping out soups when the entire staff yells out - "HOT SOUP!" We wouldn't want anyone getting doused with hot soup. Well, there you have it. The soup, salad and sandwich battle is on. I know you'll enjoy your experience at Zoup!, we certainly did. We wish Tony and his wife Julie the best of luck and encourage you to go check this place out.