To Beer or Not To Beer?

It's a really good question that you have to ask yourself when visiting Red Wing Brewery after talking to some friends of yours that have visited already and know what I'm looking for in beer and food. So, do I beer it up, I do I not? I decided to check this place out, but was it a regrettable decision?

I haven't been made aware of anything exciting in Red Wing to check out and I had to ask around to see if anything was worth checking out. Some friends of mine told us we had to try the pizza at Red Wing Brewery before mentioning anything about the brews. I thought to myself, "Really, the pizza?" They get all of their ingredients locally to make their pizzas and they looked amazing as they were bringing out pizza after pizza. One of my friends said it's the crust that makes their pizzas so awesome. Ok, lets give it a whirl!

You can order up your own personal pizza or a full size to share. I decided to order up a personal meat lovers pizza while my wife decided to build her own. My wife went for pepperoni, green olives and onions while my meat lovers was prepared with garlic white sauce, mozzarella, cheddar, pepperoni, ham and sausage. When they arrived, they definitely looked enjoyable. But, after taking a quick bite of a sausage, I asked my wife, "What does this taste like to you?" 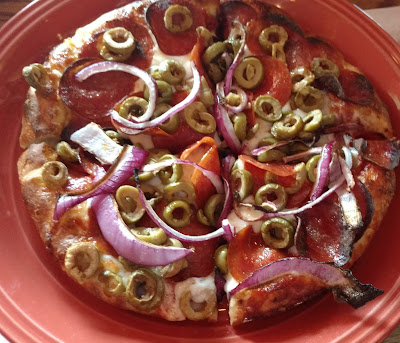 I asked that question, because the first thing that came to my mind was a sausage from Pizza Hut or Domino's. No, seriously, that's exactly what we both thought of after trying their sausage. As for the rest of the flavor and the crust, well if they didn't have the crust they had, this really would just be a glorified Pizza Hut with a brewery attached to it. 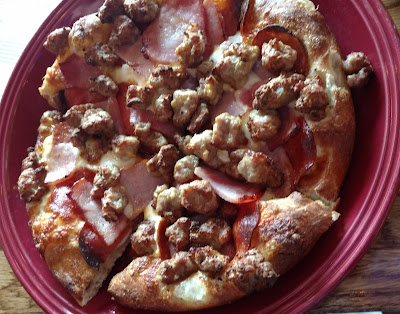 As for their beer that I know you've been dying to know about, well, I wouldn't go out of my way to check this place out. I went for a flight of everything they had on tap and their wheat's had too similar of flavors as did their full body brews, but there was a single beer that I did actually enjoy and that was their Ski Jump Special. All in all though, their brews were very bland, boring and not all that creative. Something about the beers being made in this state that just aren't exciting EXCEPT for places like; Lakeville Brewery, Modist Brewery, Insight Brewery and Castle Danger.

So, the questions remains for you... Are you going to beer it up at Red Wing Brewery or pass? The decision is up to you and everyone has a liking for different beers, but I guess I'm just used to exceptionally made beer from Oregon and my few favorites previously mentioned. The decision is yours! But, just know, there ins't much else to choose from in Red Wing if you have the same feelings as I did....