Oh my god, look at that beer, it is so crafty. It looks like one of those, yeah I don't know what it really looks like, but I do like craft beers and certainly can not lie. If fact I'l try almost anything that is labeled as a beer and variety is key. What's the perfect addition to any delicious ice cold craft brew? Food of course!

You're singing about big butts right now, aren't you? Any ways, the latest place to get my attention is sitting in the former Sunsets location and priding themselves in serving craft brews and great tasting food. Craft Beer & Kitchen is that place and they completely revamped the former Sunsets and it looks great inside with a much needed overhaul.

They certainly have an impressive list of local, regional and national craft brews, but you better like IPA's and heavy body stouts, because their beer guy must think that's all there is to enjoy. Their tap list is heavy on these with very few of the other delicious varieties; Sour's, Cream's, Brown's, Shandy's, Belgian's, Dunkel's, Hefe's, Blonde's - I could go on and on and on... You have to get some better variety. I'm just tryin' to warn you, that the beer they got is way to hoppy!

As for the food... I was just recently getting back from a trip to the west coast (Portland to be exact) and all I could think about was comparing the amazing food I had during my travels to my live for food back home. Fair? maybe, maybe not... My family and I started our evening with some wings tossed in house made buffalo sauce cooked extra crispy (surprise, right!?). These were very tasty and definitely worth ordering if you're stopping by Craft.

As for our main courses, those went as follows; my wife and mother went with their Ribeye Grilled Cheese, my pops went for the BBQ Cheddar & Bacon and while my wife tried to talk me out of it after my recent travels, I decided to check out their Lobster Mac n' Cheese. Lets help Mix-A-lot (and you) decide what you should order.

The Ribeye Grilled Cheese had some decent flavor, but the meat was more on the roast beef side than it was cuts of Ribeye. So lets call it what it really is - Beef Grilled Cheese. The menu states it as; slow roasted prime-rib, cheddar cheese, swiss cheese, caramelized onions, horseradish sauce, toasted sourdough. The radish' sauce isn't overpowering the sandwich and looked delicious. Just wasn't anything to do summer-salts over... 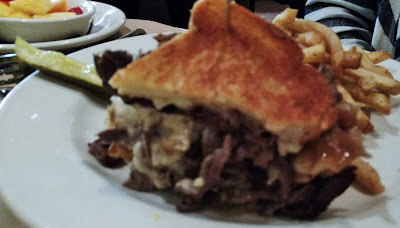 My pops' BBQ Cheddar & Bacon Burger looked delicious and by the time he was done, there was nothing on his plate - guess it was good? He said it was! 1/2 lb. burger, BBQ sauce, bacon and all the traditional fixins' and served with steak fries, which is always my option to go with. Yeah... I really don't have much more to say...

As for my Lobster Mac n' Cheese, I should have listened to my wife... It by all means wasn't bad, actually worth ordering, but it was nothing like the Mac n' Cheese I had during my recent trip to Portland. It was easily the best mac I've ever had and was a Crab & Lobster mac that was just insane. In fact, I've had some other options around the Twin Cities that were better as well. Again, it's worth checking out!

Yeah, when it comes to craft beers, this place has nothin' to do with my kind of selection. IPA - IPA - IPA, only if you like hops... Baby got Craft! As for the food, Craft Beer & Kitchen is worth checking out. I dig their Turkey Burger and Shrimp Tacos along with their wings and I'm guessing some of their other dishes are delicious as well.