Over the years, the Mall of America has had many changes. Some good, some great, some bad, some - making you think, "what were they thinking?" They have been lacking for a very long time in the food department with plenty of room for improvement, but can the latest opening help end this drought?

The latest entry into the food scene describes themselves as, Modern Mexican. I've heard traditional, authentic and whatever you want to call Americanized Mexican food, but Modern? Modern gets me intrigued. Thanks to my Elite Yelper status, I had the opportunity to sit down at the all new Modern Mexican joint, Cantina Laredo for a four course meal with fellow Elite Yelpers.

The evening started with tastings of a variety of specialty martinis made with Patron Tequila and the Patron Rep. telling us all about the product and how it's made. A friendly couple, Chris and Sabrina sat at our table and awkward first greeting turned into a great night of conversation with some very nice people. We got to know each other, talked about our love for food and what our favorite places were around the Twin Cities. But you don't want to know about our conversations, you want to know how the food was, right!? 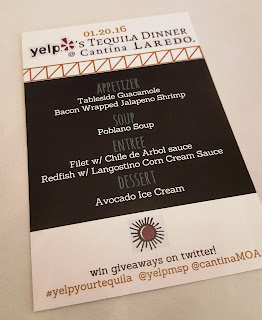 The menu that was provided to us had some amazing sounding dishes on it and we were definitely ready to get the night of food started of quickly. After one sip of our first traditional margarita, our appetizers started arriving. As our servers started to create a fresh table-side guac and chips, additional servers were delivering Bacon Wrapped Jalapeno Shrimp. Had we not had guests sitting with us, I would have ate the whole plate myself. As for the guac and chips... You simply, cannot beat, what you get in Mexico. However, it was gone! 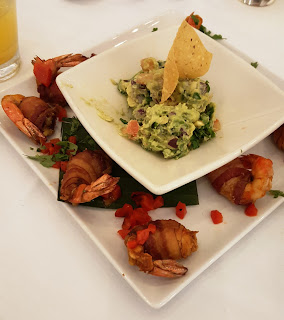 Onto another specialty drink - the Sunset Tini', which was of course made with another Patron product along with a soup. Pablano Soup was the creation and it came out looking like a potato soup of some kind and after the first spoon full, so so so much more tasty. More of a bisque and full of wonderful flavor, this soup is a must try with just the right amount of heat as well. How good? My wife says, "I hope you don't like it!" 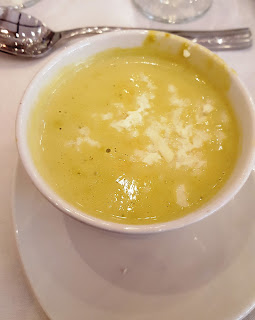 Oh look, yet another tini' creation and yes, it was made with yet another delicious Patron ingredient. At this point, you're probably asking yourself, "Are these people drunk?" The answer is no, no we were not! We're all adults, it was about trying. So after that tasty treat,, our main courses were about to make their way out to us. A choice between; Filet w/ Chile de Arbol Sauce or a Red fish w/ Langostino Corn Cream Sauce. Both couples decided to go with one of each and share. 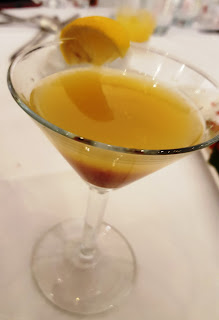 We'll start with the filet. We will always recommend that steak be served medium, never well done which our serve also suggested. We of course ordered as we normally would and Chris followed suit. Unfortunately, one steak came out well done (although we were told it was medium), while the other was very rare. The Chile Sauce had exceptional flavor, but the group collectively thought it was over powering the meat. Lots of great potential with this dish, but I would perfect the steak preparation and to balance out the flavors to make this a superior dish, I would serve it with half the sauce currently being used (which is quite a bit). A side of skin on sliced taters and grilled asparagus completed the dish. 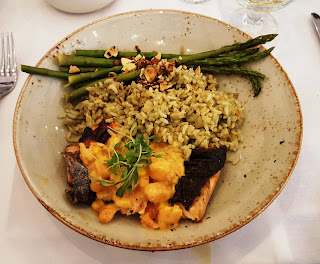 After another... No just kidding, we had a break from the alcohol and enjoyed some water. Who am I kidding, we got to try some more tini' goodness and goodness it was. About that Red fish... The best part of this dish was the Langostino Corn Cream Sauce. Absolutely delicious! The fish was a tad overcooked and while it doesn't scare me or anyone at our table, Cantina Laredo serves their fish with the skin on. It's used to keep the moisture in, but again, a tad overcooked this time around. No fishy taste to it either, but I wouldn't mind seeing a grouper or snapper instead. A side of cilantro-lime rice and asparagus completed the dish, but the rice was also a tad dry.

None of our meals were not worth eating and there is great potential for Cantina Laredo. While I maybe wouldn't order these dishes again without the suggested changes, we're definitely looking forward to going back to try other menu selections. Our evening concluded with a dessert that should never be made again - Avocado Ice Cream. It tastes exactly as described and I had to push it aside. Thankfully, you guessed it, I had a something to mask the unpleasant taste in my mouth - a Coconut Tini' which was scrumptious. 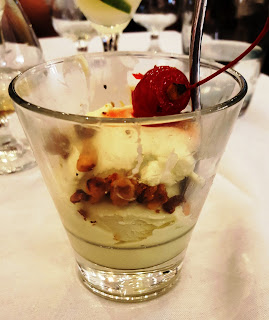 So after one round of Patron, or was it two, maybe it was five or was it four? I don't know! Anyways, we had a great time, great people to meet and sit with and Cantina Laredo really does have the potential to be a top restaurant at the Mall. Lets face it, it's needed! I would recommend 4 places to eat at while shopping (including the Cantina), when there's 3-times that to actually choose from, I just wouldn't recommend those places.

Cantina Laredo
Mall of America - 3rd Floor next to Macy's