If you look over yonder, what do you see? Besides the sun rising, it’s me about to persuade you to go check out a place that won’t be found in Tommy James’ classic hit from the 60’s. While Tommy may very well enjoy the cuisine here, he was signing about something completely different. It wasn’t drugs either!

The place I’m talking about is a place called Pittsburgh Blue Steakhouse. What exactly is a Pittsburgh Blue? According to their menu’s and website, “It’s the way steelworkers used to eat their steak: charred black on the outside, cold and raw on the inside. Some say the men cooked the steaks themselves, throwing slabs of meat directly onto the steelworks’ soot-blackened furnaces. Others claim that the laborers, fresh off a grueling 12-hour shift, would head to the bars for their favorite food, but were so hungry they didn’t have the patience to wait for the steaks to be cooked through.” 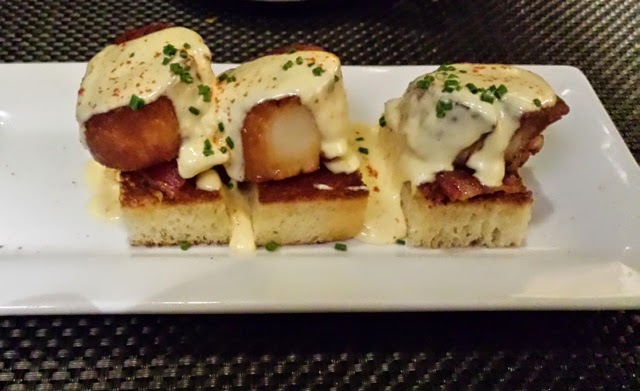 Well, there’s your history lesson for the day, on to the food! Heidi, a friends of ours, had been to Pittsburgh Blue already and had recommended that we order an appetizer, but not just any appetizer. According to her, this was the best appetizer at Pittsburgh Blue and a must try. That app, my friends was the Sea Scallops ‘Benedict’. Sea Scallops, Applewood Smoked Bacon and Hollandaise over, what appeared to be a giant crouton. Melt. In. Your. Mouth! If you like seafood as much as my wife and I do, this IS a must try for sure! We also had a giant loaf of bread come out that was pretty delicious, and just because I’m selfish, I would have liked to have the garlic seasoning they put on it to be all over the top, sides, inside, in the butter, wherever they could put it and not just in small area. That’s just my selfishness talking… 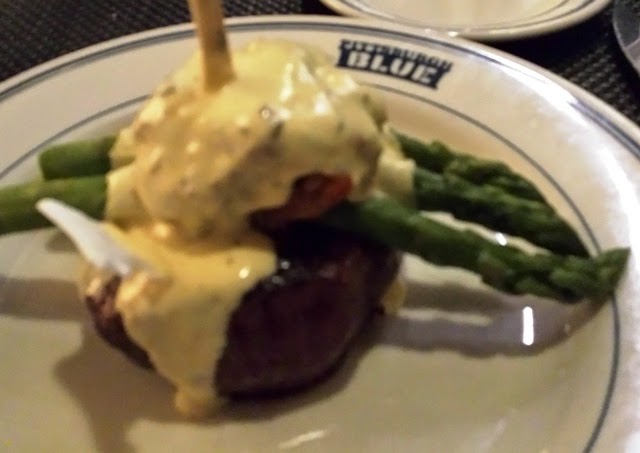 The specialty at Pittsburgh Blue is the Filet and man oh man is it tasty. They have 7 to choose from and we decided it would be best to go with the Filet ‘Oscar’. For you rookies, Oscar simply means the filet is topped with a lump crab cake and a Bearnaise sauce. This Oscar also had asparagus that my wife ate for me as I am not an asparagus fan. Just. Like. Butter! Again, if you like seafood, get the Oscar and thoroughly enjoy your meal. 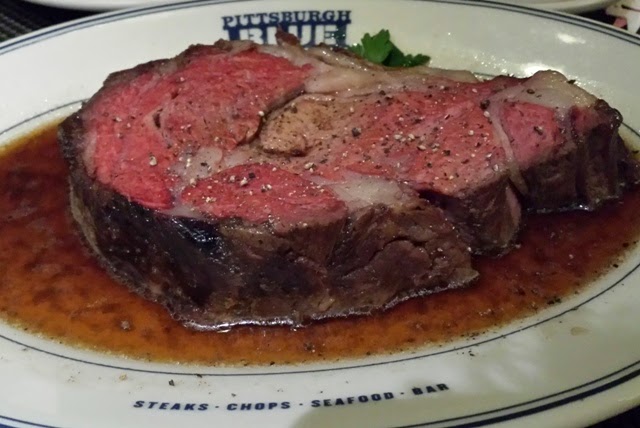 The other cut of meat we decided to go with was their prime rib, a 16 oz. King’s Cut Prime Rib to be exact. Aged for twenty-two days and slow roasted with sea salt and herbs. It was probably one of the best prime ribs, if not the best, that we’ve had. This thing had the perfect balance of flavors and I wanted another one. Most places either severely over cook or under cook a prime rib, but when you say medium, it comes out perfect! 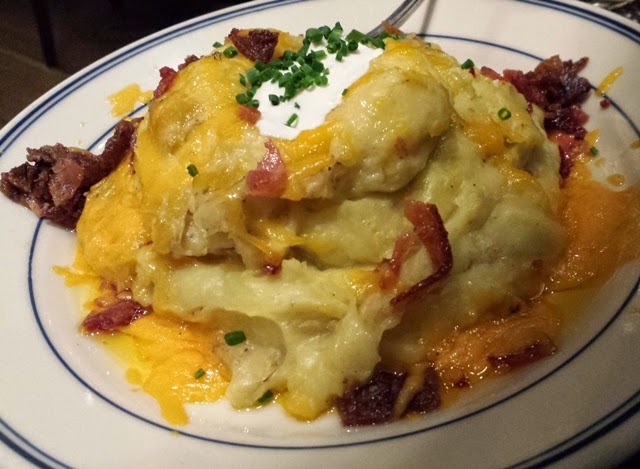 Pittsburgh Blue doesn’t provide you with sides unless you’re getting a burger or sandwich. Instead, they like to serve their sides family style and when they say family, they mean it. There’s plenty to choose from, but we decided to go with the Loaded Mashed Potatoes. These come with everything you would expect them to – Applewood Smoked Bacon, Sour Cream, Cheddar Cheese and Green Onions. If that’s not going to cut it for you, check out their Grown-Up Mac & Cheese. It looked awesome!

If meats not your thing, that’s just fine. They also have a great selection of seafood and a couple of selections that caught my eye were the; Swordfish, Halibut (probably my favorite fish to eat) and Pistachio Crusted Walleye. I read a review and in it, the person described this place as a glorified Perkins. I was just thinking… Man it’s been a long time since I last ate at Perkins… I really do love their tender, hand-selected filet mignon’s, King Crab Legs and other delicious cuisine NEVER found at a Perkins… I chuckled! J So, was I able to Pittsburgh Blue Persuade you? Enjoy!