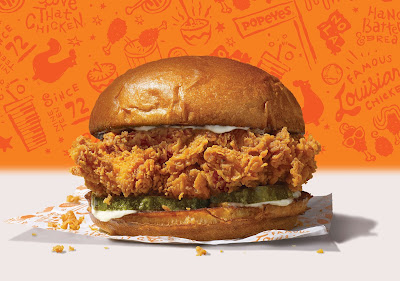 There is something special about fried chicken, especially if the jeans fit just right after you enjoy some delicious fried bird. While I will always choose a local ma & pa shop first, when you need something fast and it's readily available, we unfortunately turn to fast food to fill the void.

There has been a lot of hype lately about the new chicken sandwich found at Popeye's. Reports of people being assaulted for their chicken sandwich, A CHICKEN SANDWICH! People willing to do anything to get their hands on this chicken sandwich. Calm down people, there's plenty of fried birds to go around for everyone. Just have a little patience when they run out...

Any who... It was time to try one for myself and I was able to purchase said chicken sandwich without myself or anyone else being hurt. In fact, I walked into my local Popeye's, was greeted very nicely and walked out with my sandwich in hand for 3.99.  But, is the Popeye's chicken sandwich legit? Is it worth assaulting someone to get it? No to the assault charges, but I think it's time to reveal the rankings for fast food chicken sandwich and coming in at number 1 - Popeye's!

1. Popeye's
I've heard the good, the bad and the ugly about this sandwich and in my opinion, it's a solid sandwich. Well, at least the classic sami that I received. That great flaky and tasty exterior Popeye's is known for, the chicken was super juicy on the inside, grilled brioche bun and a mild helping of mayo. I've always liked Popeye's after first experiencing it in a Texas airport during some traveling with my wife. Was hooked, but had to wait a couple of year's until Popeye's appeared in the Twin Cities.

2. Chick-Fil-A
A place that I thoroughly respect for their beliefs, closing on Sunday's for a day of rest and serving some delicious chicken sandwiches and nuggets. Seriously, their nuggets are killer. But, this is about the chicken sami's and they're certainly delicious, but just not quite that flaky crust that I enjoy so much from Popeye's. Definitely not as big as Popeye's as well...

3. KFC
Seeing more and more of these close down it seems like, but their chicken has always been tasty, greasy, but tasty. It's fried chicken, it's going to be unhealthy for you! Pretty simple sandwich, smaller than the previously mentioned sami's, but worth the try.

5. Culver's
Known for their delicious "better brand of beef, makes a butter burger better" and yes, they are tasty, the chicken sandwich is pretty solid as well. I prefer their chicken tenders myself, but if you're craving a chicken sandwich and the above mentioned isn't available for purchase in your area, then check out a Culver's Chicken Sandwich.

6. Wendy's
While I'd rather get a junior bacon cheeseburger, nuggets or a chocolate frosty, their chicken sandwich isn't half bad. Decent flavor in the breading and the chicken isn't dry either. Nothing special for a bun like the rest of the options you have to choose from here.

7. Raising Cane's
Their big thing is their chicken tenders, but yes, you can get a chicken sandwich if you're really craving the extra carbs and need that bun. It's just a couple of tenders in a bun. Not terrible, but I'm sot sure anything else really needs to be said...

8. McD's
Big Mac's. Chicken Nuggets. The Quarter Pounder. The Happy Meal, gotta have that toy... Yes, McD's is known for these things first and foremost and they've steadily been trying to make their food more appealing and making changes to the menu. The old chicken patty has a competitor in their buttermilk crispy chicken sandwich. It's what you would expect from McD's.

9. Arby's
I would simply say, stick to making roast beef's and shouting out, "We Have The Meats!"