Are You Cheering for This Kaposia?

My wife and I, along with our boys, decided to check out the Kaposia Club for their grand opening and while the town may be cheering for this new addition, I’m not quite there yet. A benchmark has been set and after our first visit, I’m hoping that they will only become better and provide a high-quality culinary experience. Not just for the locals, but neighboring communities as well. 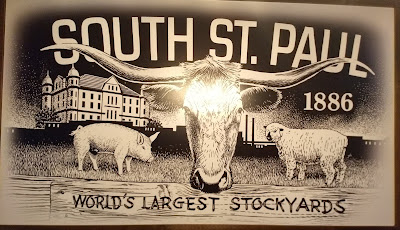 As you first walk in, you’re greeted by an awesome mural of what made South St. Paul famous, the world’s largest stockyards. The rich history of South St. Paul continues into the entire restaurant with old pictures and relics all over the walls. The overall layout and feel of the restaurant is warm, comforting and inviting. A large fire place splits up the dining room from the large over-sized bar area. And, a party room for up to 32 people finishes off the establishment.

How about that food!? The menu is pretty typical for a sports bar, casual dining restaurant. Apps, soups and salads, dinner (the usual steaks, pasta, ribs, etc), sandwiches, burgers, pizzas and small plates for your little ones. Nothing really stands out as a must try! The tap list is somewhat decent with a variety of local brews and out of state brews – I would say a better selection than nearby competitors. But, I do have some immediate suggestions for changes to the menu - set yourself apart from your nearby competitors;

Replace with (in order): A solid Philly. This part of the world needs a solid Philly. Anything else, but a Torta. I can’t imagine this will be a big seller? Consider a wrap with something other than your typical white or wheat – I would look into Rosemary, Spinach, Sun Dried Tomato. A quality club with a chicken breast, bacon, aioli, arugula on anything other than white or wheat bread (perfecting the current chicken sandwich so-to-speak). Burger options are far too typical. Create a signature Kaposia burger that isn’t comparable to an eating challenge (Bobby’s Ultimate). Think like a real chef and create an exceptional burger. Find a new bun and get creative! Consider a flat top option. Once you go flat top, you won’t go back.

So, what did we order for our first trip? Our little guy went for the mini corn dogs, my sweetie went with a Reuben and I built my own burger (something most people I feel will be doing with the current menu options). Quickly, the mini corn dogs are what you would expect – out of a frozen bag. This isn’t a dig on them. We’ve only come across a very small handful of establishments that have done homemade ones. 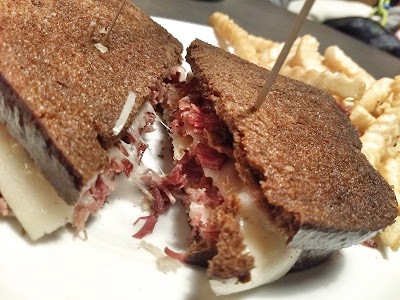 As for the Reuben and Burger; my wife’s Reuben was a tad on the dry side, however it had potential with a nice flavor to it. The pumpernickel had a decent grilled crisp to it which was nice instead of being soggy bread that we have come across from time-to-time. As for my burger, well, it was just a burger. I built my own medium prepared 1/3 lb. with cheddar, pepper jack and bacon, with a side of mayo to make my own personal concoction. It arrived without bacon which was fine, the server was kind enough to remove it from our bill. While I would eat this burger over some of their immediate competitors, it’s still nothing that would draw me back for a second nor make my top 10 list. A quick hit on the fries – love that they decided to go with crinkle cut fries, but I would bring White Castles or McD’s fries with me. 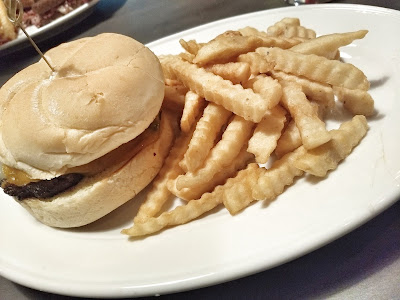 I want so badly to stand up and cheer for the Kaposia Club, a new restaurant is badly needed in the northern Dakota County area. Yes, they have just opened their doors and they have some growing pains to go through like any new restaurant goes through. But, again, a benchmark has now been set and time will tell if they only become better and evolve or stay right where they’re at. And, are they perfectly fine with that? One thing they will need to work on immediately, service time from once you’re sat to being greeted by a server. Much too long….

I’ll give the Kaposia Club a few months and make a return visit to see if anything has changed for the better and if they’re setting themselves apart from the competition. Maybe I'll even check out their Friday Fish Fry special and see if that's something worth adding to my top 10 list....