I’m Going Back To My Roots!


Back in 2009, a couple of pals decided that it was time to enter the culinary scene in White Bear Lake and I thank them for that decision. They called it Manitou Station and they offered some delicious Irish pub grub and even offered what I consider to be the most important and best created appetizer item to ever be created – Scotch Eggs!

When I first went to this place with a native Laker and co-worker of mine at the time, I immediately fell in love with the food, especially those darn Scotch Eggs. Sausage wrapped around a hardboiled egg, baked and deep fried to perfection and served with some spicy mustard. Seriously, who thinks of amazing things like this?

Then, some identity changes came. They decided to re-brand under The Station and to be more of a white linen restaurant, but dropped several of their key menu items. And, while I understand that you have to keep it fresh and new, they removed too many comfort food items, including the Scotch Eggs and customers weren’t returning. Items that made them who they were. Items that drew people back for seconds, thirds, fourths… But, it all came to an end finally when new owner Brian took over and deciding to go back to some of the roots of what made Manitou what so many of us enjoyed about it. The all new Manitou Grill and Event Center was born and today, they’re doing fantastic.

They brought back all those great comfort food items that were enjoyed by the community. They brought back the Scotch Eggs that I love so dearly. They added some new items and even added something that is a MUST TRY! Brian took a trip out east and during his travels came across a little street food vendor serving Lobster Rolls. He decided to grab a sack and immediately fell in love and wanted to make it a feature on his menu at the Manitou. 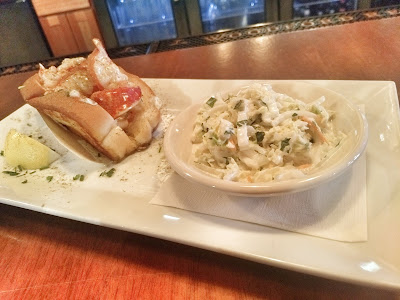 Today, his Lobster Roll, the same one he fell in love with walking down the streets of New York is now one of the best selling items on the menu and is definitely a must try if you’re a seafood fan like myself. Seriously, it’s one of those items that will definitely have you returning for seconds, thirds or fourths. And, on Wednesdays, they run a dinner special on their Lobster Rolls.

It appears that Manitou Station had to lose its way to know which road to take and Brian and his talented chef, Andrew are definitely on the road to success! I applaud them for what they are currently presenting to us patrons.