Since hearing about the opening of a new restaurant by the same ownership as Red Cow, I’ve been very much interested in wanting to check this new venture of theirs out. And, while I was hoping that this place would be a little slice of heaven, I felt more like Bugs Bunny when he said, “Don't think it hasn't been a little slice of heaven...'cause it hasn't!”

Red Rabbit, a nice spin off from their Red Cow movement, opened its first location in the North Loop district in 2016 with a focus on delivering “craveable authentic Italian” dishes and thin crust, wood fired pizzas. And, just a short time ago, the addition of their St. Paul location. Unfortunately for this huge fan of the “Red” movement, I did not leave Red Rabbit craving more. No, for my first trip, I was instead craving other Italian dishes and pizzas found elsewhere.

The evening didn’t start off the best way… A 30-minute wait turned into about an hour wait and with 2 littles that were getting antsy and hungry. To top it off, a group of “dressed to the nines” elders came in and immediately requested to speak to a manager about a table not being ready for their group of 6. So, a manager, feeling the pressure, made every effort to seat this group and overlooking the rest of us on the wait list. Unacceptable.

Once we were finally sat, we quickly made our decision on what we wanted to order since we had plenty of time to review it. We wanted to share a couple of items and make sure out 4-year-old could eat as well. The Red Rabbit has no children’s menu. We went with a cheese pizza; a classic spaghetti & meatballs and a pizza dubbed, the Family Favorite. And, for our troubles of waiting, an appetizer arrived called Burrata which by the way, is nothing to really brag about and we’ll start there…

The Burrata, a mozz. ball on the outside with stracciatella and cream on the inside. This was accompanied by heirloom tomato, broccoli pesto, lemon and evo. Again, nothing really to brag about, but certainly edible. And, out came our meals and this is where I started to feel just a little like Bugs Bunny…

We’ll start with our pizzas. The cheese pizza was a cheese pizza. You can find it anywhere! As for that Family Favorite, prepared with pepperoni, house sausage and green olive. I’m not at all an olive guy so those went on half the pizza so my wife could enjoy them. If you can’t handle any spices, you won’t like the sausage here. I love spice, but it’s a bit much if you want to market to a broad group of people. As for my overall thought, I have plenty of Neapolitan style/wood fired pizzas in my day and I often find the centers to be nothing, but a soggy mess!  However, I have had some that I crave and craving even while I write this, unfortunately, Red Rabbit’s isn’t one of them. Not even close! 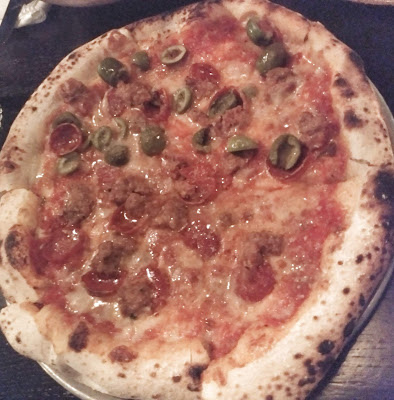 Moving on to the spaghetti that came out looking like a kid’s meal in a large bowl. No, seriously! Where did the rest of it go before it made it to our table? My wife took a bite, shrugs her shoulders and says, “It’s not the best!” As I started to take some bites, my thoughts were the same. Pretty bland and I was thinking about other dishes I would have much rather had. Again, not inedible, but nothing I would consider “craveable”. What am I craving right now? Young Joni, Boomers for some pizza or Inonni and Buon Giorno for my pasta fix. 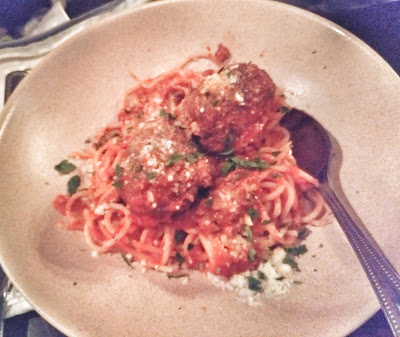 All-in-all, not the best experience for what I have known from ownership and Red Cow. However, this was location number 2. Typically, in my experience, the flagship location is usually more superior until the kinks are worked out and all staff are on the same page at all locations, delivering consistency. So, I’ll have to check out the North Loop spot and see if I will indeed, crave Red Rabbit.