The Ale House I'm talking about is the Ox Cart Ale House located near the all new CHS Field. A supreme location for any Saints game thanks to the addition of a rooftop patio with views of the stadium and the giant scoreboard. If it's a beautiful day, this is most definitely a place you want to be at, right? Well, unfortunately, this is where the bumps in the road have to be addressed.

My wife and I, along with our neighbors Dave and Jennifer, decided to keep the kids at home with sitters and go out on the town. Ox Cart Ale House was the pick for the evening and we were excited to check out the rooftop and enjoy the evening. But first, you have to try to get to the top! The elevator decided they didn't want to function properly, so it was 7 flights of stairs to the top, but the door was locked. Made a quick phone call and access granted. We found a table and this is where things went a little bumpy.

It appeared as though there was only about 3 or 4 servers for a completely packed and large rooftop patio as well as a full bar. It took quite a bit of time before we were addressed (which isn't a deal breaker and understandable when it is busy), but once our server came to take our drink order, she never placed it (I'll explain shortly). We also quickly ordered our meals for the evening as we checked our weather maps to see just how close the storms were - one rain drop, a dozen rain drops - I think it's time to head inside.

As we sat and contemplated our decision, our server continued to go take orders at other tables, eventually making her way to the kitchen. We ultimately decided to head downstairs and grab a table for a mad rush of everyone else deciding to do the same thing. I went to find our server and let her know to cancel or transfer our order while my party went downstairs to grab a table. Upon finding her (while running out some food to other guests), she informs me, "I never placed your order, so just head downstairs." Had we decided to stay on the rooftop, we would have never received our drinks and we would have been stuck in the rain before our food would have arrived.

Ok, some bumps in the road, whatever! It's the food we're after and it was outstanding! I briefly informed our new server of experience and I tried to keep her from feeling nervous. We placed our drinks order and they came quickly. Another quick bump in the road - the tap and menu selections differ between the main restaurant and the rooftop which was a little frustrating since there were beer selections we couldn't get. We then placed our food order and started our evening conversations (you had to be there!). Also, they have Red Stripe tall boys - TALL BOYS!! One of my faves...

Dave ordered the House Burger, His wife Jennifer ordered the Grilled Cheese, my wife ordered the Fried Chicken Sandwich and I went for the Lamb Burger. Time to let it roll, baby, roll!

My wife thought her Chicken Sandwich had some good flavor to it (it was the spice aioli), but didn't think she would really order it ever again. To be fair, when it comes to chicken, she tends to find it boring already, and likes it to be perfect (who can blame her?). I tried it and thought is was actually good, the aioli definitely helped and I would say give it a shot. Made with cornmeal batter, previously mentioned spicy aioli, dill pickles, lettuce and served on a milk bun. 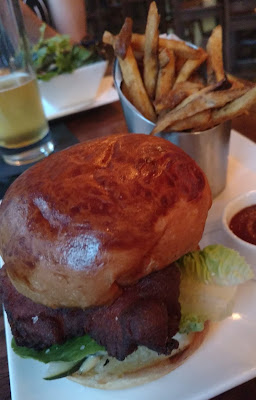 Jennifer decided to add some bacon to her Grilled Cheese (smart decision - bacon makes everything awesome), made with caramelized onions, tomato, Emmentaler (a form of Swiss), mustard-dill sourdough.She had that thing gone pretty quickly! Her hubby tried it, liked it as well and while I didn't try it, I can't imagine it was terrible. 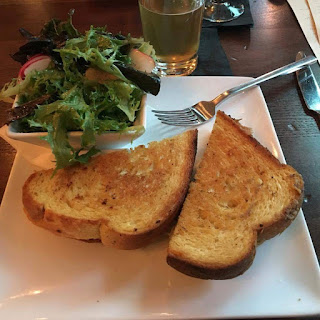 My Lamb Burger was an outstanding selection and one of my favorite, creative, non-traditional burgers I have had. I asked to have prepped to a medium and it's made with arugula, cucumber (which I removed), Aleppo pepper, Greek farmers cheese, mint and served on a milk bun. WOW! IF you like lamb, which I thoroughly do, you gotta try this one. 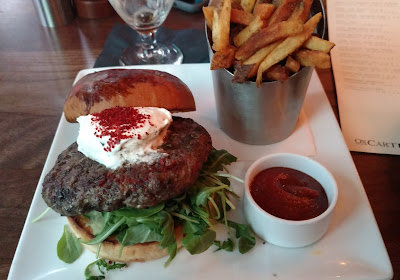 We saved the best for last! Dave's House Burger was the best meal of the night and will be included on my top 10 list - I'm A Meat Eater. Made with ground fresh daily and perfectly seasoned meat, caramelized onions, dill pickles, American cheese and served on a milk bun. Seriously, this was an awesome burger and I wanted seconds and even asked Dave if he wanted to trade. It was gone quickly! 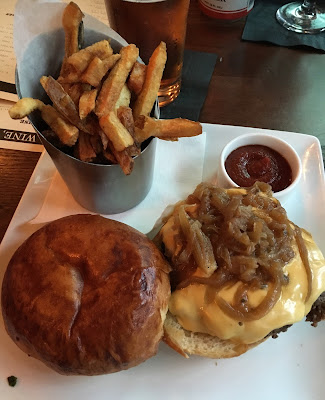 We finished with some dessert adult beverages, watched a little domestic across the street, praised our server after speaking to the G.M. Dan and just enjoyed the rest of the evening. We may have gotten a little moist from the rain, made a poor decision to stop at a weird place called the Bedlam, but we had an awesome night making memories together! There was no Doors music heard during the evening, but there was some really bad elevator music at Bedlam!

Check this place out, but just keep an open mind if you venture to the rooftop!