Zio Is No Primo

The Mall of America continues to expand in every direction it possibly can. New stores (some of which only the elitists can afford), two new hotels, but more importantly, some more food options. While I think the mall is completely missing the mark except for a very small handful, at least they're trying?????

During a recent visit to the mall, my wife and I found ourselves trying to think of something to eat, with nothing sounding all that interesting. Sure there are a couple of places definitely worth eating at (Cedar + Stone and Burger Burger), but we like trying new places. We ended up settling for a place called Zio Modern Italian. They pride themselves in providing only fresh ingredients, nothing from a jar, can or frozen.

Nice architecture. Elegant appearance. Very modern, but after you review the menu, you quickly notice overpricing taking place for what you receive. I did a little research prior to dining at Zio and I found out that it's ownership, Kaskaid Hospitality, is the parent company for Crave Restaurants and Union Rooftop. If you know me, you know I'm not at all a fan! All you're going to receive while dining at one of these places is very mediocre cuisine and extremely overpriced for that same mediocre food.

Back to Zio and our first meal with hopes of a positive good first impression. As we sat down, the server started to pour out a little extra virgin olive oil on a plate and cracked some fresh black pepper into the oil. Nothing to get too excited about and a pretty lame attempt for "finer dining". Do yourself a favor and swing by Giuseppe's Restaurant in Rosemount and see what it takes to impress your patrons!

My wife wasn't all that hungry and settled on a Caesar Salad. Sitting in this restaurant, you would think they would bring out this amazing looking salad, amazing dressing, fresh - homemade croutons and would be downright amazing. Well my friends, we thought exactly that, but got the complete opposite! See for yourself - anyone for a side Caesar from some crappy chain? I couldn't stop laughing! At least the lettuce was cut perfectly... 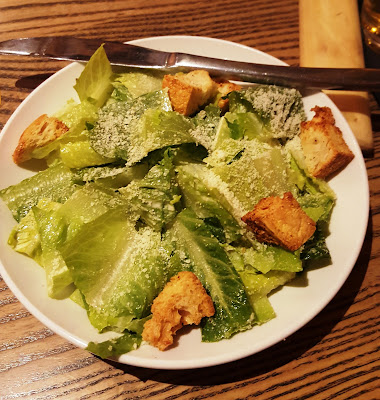 I decided to go with one of their pizzas, the Fennel Sausage Pizza. Spice sausage, caramelized fennel, house made sauce and provolone. Sounds delicious, but provolone doesn't belong on a pizza, so I asked for them to put mozzarella on it instead. To my surprise, I was asked if a $2 charge for swapping cheese was OK. We wouldn't want to put any extra pressure by having the pizza cook put his hand in the mozzarella bin and not the provolone bin, would we? I find it comical that they prepare their pizzas in a wannabe wood fired oven as well. 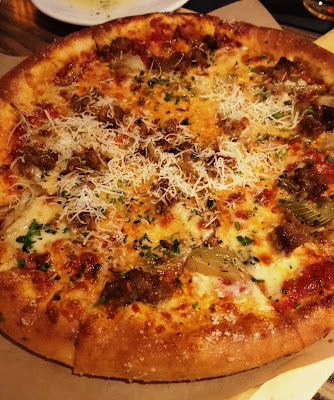 It wasn't by all means disgusting, actually not bad. I would however drive to Punch Pizza, Black Sheep or some other place out there over Zio to enjoy more superior wood fired pizza before going back. As for the other cuisine on the menu, I took the time to wonder around the restaurant on my way to the little boys room and perused dishes and wasn't at all impressed with what I was seeing. Again, not surprised coming from the people behind Crave and Union.

No, Zio is definitely not all that primo, they missed the mark on first impressions, but I would really need to dig into their other dishes to really see what they're all about. I'm just not in a hurry to do so! Look, if you want an amazing zza, check out the places I mentioned earlier. If you want an amazing Caesar or Italian in general, check out Giuseppe's Restaurant, I Nonni or make your own - that would still be better. If you are at the mall, check out a place called Burger Burger (another Kaskaid owned business that will hopefully not be ruined because it's awesome), the hotel restaurants or even Hooters. You can't go wrong with awesome chicken wings and cold beer!