If I had $1,000 just laying around, I would probably buy myself something really nice, but it probably wouldn't be enough for a llama, emu or some crazy elephant bones. I could however buy all of the delicious Kraft Mac n' Cheese that I would want, but I'm also a Shells and Cheese guy, so that's out!

What I wouldn't buy for $1,000 is a burger with that price tag, but I would try a burger that was called that... Well, we're all in luck because a new brew house in the Northloop neighborhood called The Freehouse has a burger called, $1,000 Burger. My wife and I made plans with relatives to attend the Chesney/Aldean concert at Target Field and of course needed a place to grab some grub and brews before we went to party. I had looked over the menu a few times prior to deciding where to eat and after speaking to some neighbors, the decision was easy!

I like seeing more and more brewpubs popping up wanting to create their own brews and serve some delicious food. I love trying new flavorful craft brews and The Freehouse is definitely doing it right. I went for their pony samplers and tried the Kolsch, Brown, Stout, Witbier and Blueberry Blonde. Kolsch could easily compete with some of the best, the Brown and Stout were very smooth, the Wit was outstanding as was the Blueberry.

I suppose you want me to get to that $1,000 Burger??? Not quite yet, I have some other dishes to share first. Lets start with my wife's meal. She wasn't very hungry after we had a bit of a late lunch with some neighbors so she was looking for something a little on the lighter side. Their Chick Pea Wraps struck her fancy and by the sounds of it, on the lighter side. Made with crisp lettuce, sunflower seeds, cucumbers, avocado and roasted tomato, they arrived like large lettuce tacos. She described them as edible, but lacking flavor. After I took one bite, I would also agree with that statement. Maybe some "pre-wrapped sausages" would be a better idea? She also order a side of their "yesterday's soup special" which was a BLT themed creamy soup and that was very good and worth trying whenever it's available. 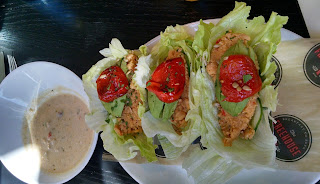 My in-laws on the other hand were indeed hungry and decided to go with the SoCal Shrimp Tacos made with crispy shrimp, cabbage, jalapeno and chili aioli. Out came 3 large tacos, looking oh so delicious and my sister in-law thoroughly enjoyed them. My brother in-law decided to take on the Le Cheeseburger made with ground chuck, lettuce, tomato, onion, egg bun and choice of cheese. Looked very juicy, delicious and even though it was good, he really wanted his wife's shrimp tacos. 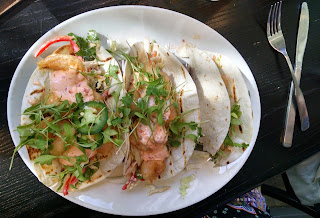 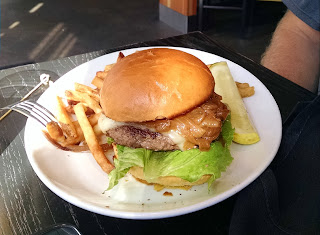 Ok, the wait is over! If you have $15, you can try the $1,000 Burger, that's it, just $15! If I had $15, if I had $15... Yeah a Million sounds much better... Alright, alright, the thing that catches my attention with any food is the uniqueness and with the $1,000 Burger, it was 2 simple words - Duck and Fat or Foie Gras. Made with short rib, brisket & sirloin, duck fat, No 4 butter, house english muffin and white cheddar - this is a burger worth trying. Very juicy and full of flavor, but there are a couple things that I would do to make it even better. One of them (which I did) was added some fresh jalapenos to my burger to give a little spice. The other would be to add another dollop of wonderful duck fat. It's like biting into the worlds best tasting butter and it makes everything better! 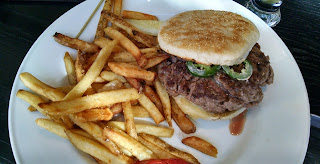 I definitely will go back to The Freehouse and if you ever want to buy my love, it doesn't take money, it just takes delicious food, but it's also not for sale! Although, if I did have a million dollars, not only would I be rich, but I could go and find all kinds of other amazing foods to try and maybe, just maybe, I would buy "really expensive ketchups - the fanciest Dijon ketchups."

at 11:48 AM
Email ThisBlogThis!Share to TwitterShare to FacebookShare to Pinterest
Labels: Brewpub, Burgers, Locally Raised, Northloop, The Freehouse, Warehouse District