Valley Tap House in NOT a very, very fine house

You won't find two cats in the yard while dining at the Valley Tap House and you're definitely not going to find Crosby, Stills, Nash & Young either. What you will find if you're as lucky as my wife and I won't please you much and will probably make you not want to go back as well. Lets hope the owners get a chance to read this cause some changes need to be made..... and soon!

This place is owned by the same folks that own the Lyndale Tap House where you'll find an excellent chef serving some outstanding food and yes there's a blog for that - It's PITastic!. The unfortunate thing at least on the day my wife and I decided to stop by is a poor reflection on the entire company and that's not good. As soon as we arrived, it was already going down hill and it's the type of stuff that managers should be able to take care of rather easily.

As we arrived, the hostess had walked back to clear off a table on the patio so we could sit outside on one of the first beautiful days of the Spring season. After about 10 minutes going by and we see the hostess with an assortment of dishes and dropping them off at in the back kitchen. As she walked back to the host stand, she was immediately stopped by another patron with 4 separate checks in his hands asking for someone to help because his server seemed to have went missing (there was about 4 or 5 couples in the dining room so it shouldn't have been an issue). Finally, she brought us to our table and 15 - 20 minutes later with no one behind us OR waiting. My question - What exactly is her job?

We'll get to the food, don't worry, but this stuff is important. As we approached our table on the patio, I felt like I was being sat next to their dumpster out back. Ever hear of a broom and about 10 minutes of some actual labor? Cigarette butts EVERYWHERE, food all over and right at our table alone, it looked like the trash compactor had a leak. How hard is it to sweep up the garbage before seating new guests or taking care of some of the other trash before you open? Time for some new management or workers that are willing to provide a good customer experience - isn't that what it's all about? I almost forgot, it doesn't look very professional if your hosts leave their cigarette packs out in the open on the host stand next to their cell phone and the company phone, just sayin'... 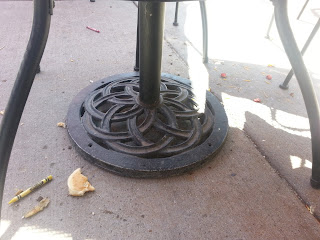 Okay, lets talk about the food! Lets just say that the chef at the Valley Tap House could use some educational course compared to the chef and his culinary team at the Lyndale. NOT EVEN CLOSE! We saw a pretzel app go by that looked pretty good, but when we got our very own delivered to us, we were wishing we had chose something else. Pretzel? Nope! It was more like a stale bread stick with some salt on it. My wife ordered a Margarita and why do so many bars fail at making these things? Is it really that hard to make a good Margarita? Do we need to send bartenders down to Mexico for some schooling? Far too many times, when I ask my wife, "how's your drink?", she just shrugs her shoulders and says, "it is what it is!" Than she saw a guy at the table next to us with a Bloody and she said, "I should have gotten that!" Than the guy asked the server to return it to the bar because it had no flavor. So far so good, right!?

On to our main meal that we had for lunch and hoping that it could salvage our dining experience. We ordered their Cashew Chicken Salad Sandwich. They CANNOT screw this up! Looked good as it was arriving to our table and thankfully, it wasn't half bad, BUT! Question to the owners if they're reading this - What's with all the onions and why did you forget to add the cashews? It said Cashew Chicken Salad, not Onion Salad Dressing and a little Chicken Sandwich. And another thing... I know you want to get the most out of your ingredients and food items, but do you really need to serve the bottom of the french fries bag? the longest fry was probably an inch if that and the majority of them were probably embarrassed to be called a french fry.

So! Would I tell you to go to the Valley Tap House? Probably not. Would I tell you to instead go to the Lyndale Tap House? YES I WOULD! Until there is some sort of confirmation that they have made some MUCH needed changes to this restaurant, I wouldn't waste your money. I hate to see this happen, because I really like the Lyndale and the Valley is making them look bad and it's little things that are being over looked, so correct them. In fact I'll even help you with one... Someone on the staff actually thought that this fork was suitable to provide to patrons. Sure this is what a fork looks like after crab legs and I sure do wish I had those instead! :)

Wow. I love this place - food has always been fantastic when I've been there. Too bad you had such a poor experience.