The Honey Badger might not give a BLEEP if his food is delicious or not, but my wife and I certainly do and we just had an amazing four course meal and craft brew pairing at the Lyndale Tap house. They have had a few of these the last few months and I was lucky enough to win 2 passes for my wife and I to go and enjoy one of their pairings and this one included local craft brew makers; Badger Hill Brewing Co. & Lucid Brewing Co., both from Minnetonka.

My wife and I are not huge IPA and extremely hoppy brew drinkers which Lucid was, but we will enjoy a good Ale or Stout which is what Badger Hill was and the food that went with these brews was by far some of the best meals we’ve ever had and one of them took the top spot of one of my all-time favorites and you might be surprised what it is… A little side note too… This meal was better than any meal I had while my wife and I were in Punta Cana, Dominican Republic and Executive Chef, Phil agreed with me after he and his wife traveled there as well.

Course #1 was a Blackened Catfish, served with a Cheesy Corn Grit creation and some spicy Collard Greens and paired with Lucid’s VERY hoppy Lucid Foto. Some of the best fish I’ve ever ate anywhere and I don’t think I’ve ever had cheesy corn grits, but I want more! I wasn’t big on the collard greens, but my wife cleaned her plate… I think she liked it!

Course #2 was a House Made Spaghetti with Beer Braised Sausage and Peppers in a Mustard Cream Sauce………… My favorite spaghetti was at I nonni in Mendota until I had this one! Absolutely fantastic and I told Chef Phil he needed to add it to the menu for good and his response was, “It will be an option at our new store opening in Eden Prairie.” Guess I know where my wife and I are heading! This meal was paired with Lucid Dyno which to me was a hoppy Coors Light or a watered down hoppy beer.

Course #3 was a Pork Carnitas that was served with some Orange Zest on some Peppered Chips with some Jalapeno Guac that was deeeeeeeelicious! I don’t eat much guac, but this stuff was good. This meal was paired with Badger Hill’s, Three Tree Rye Ale which wasn’t all that bad and a full body brew that was less hoppy and more enjoyable.

Course #4 and one of my all time favorite deserts ever was a Turtle Popcorn: Kettle Cooked Corn with Chocolate, Caramel, Bacon and Pecans… “Did you just say bacon?” Y-E-S I D-I-D! Wow is all I can say and the chef was even kind enough to bring an extra one out for my wife and I, it was that good. Its accompanying brew was Badger Hill’s, Foundation Stout and our favorite brew of the evening as well. 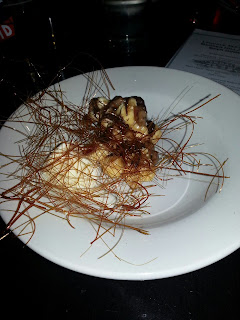 I mentioned that the spaghetti was going to be added to the menu for their new location in Eden Prairie which is awesome news, but the rest of these outstanding meals currently are not offered, BUT I did tell Chef Phil that he should include them so maybe he’ll take my advice. If you want to try the cheesy corn grits, those are currently a side and I would recommend you try them for sure!

The Honey Badger can continue to be the most fearless creature in the world and eat its snakes, mice and larva, but I think my wife and I will stick to amazing meals like the one we just experienced at the Lyndale Tap House instead! :)

at 11:31 AM
Email ThisBlogThis!Share to TwitterShare to FacebookShare to Pinterest

Great dinner and the food was fabulous! Thanks to Chef Phil!