Did Someone Get The Best Of JAKE'S?

"I need somewhere to hang my head" after mine and my wife's latest trip Jake's City Grill which was one of our favorites, but I think someone got the best of Jake's and changed some things and it wasn't for the better. Not sure if they swapped out their executive chef for one that isn't the greatest, but they definitely changed one of the best things they had on their menu and that was their fries.

You're not really upset about the fries are you? Yes, yes I am! Jake's used to serve these yummy skinny fries, but now they're serving these typical fires found everywhere. Dear Executive Chef... You set yourself apart from everyone else, why would you change that? You should consider making changes for the better! I'm sure you're still getting people coming in, but on the Saturday night that my wife and I stopped in during the prime time of evening dining, it wasn't that busy. It was even strange when our server walked by and said our drinks would be coming shortly, the bartender is a little preoccupied. How? No one is here!

Well, lets talk about the dishes my wife and I had. As we were getting sat, my wife saw something that looked good and wanted to get. That was their handmade Pizza Rolls with a Caesar salad in the middle of the plate. By the looks of the picture I took, would you eat it? Of course you would! However, if you want an awesome handmade pizza roll, you should consider stopping by Lucky's 13 or Old Chicago. While Jake's version had some delicious sausage, it had very little sauce and almost no cheese. IT'S A PIZZA ROLL! 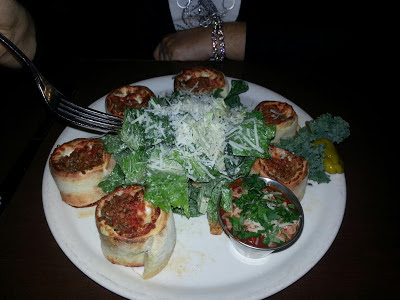 I decided to take a stab at their Philly Style - Prime Rib Dip. Where do I start? Again, by the picture, anyone would want to devour this thing just by it's pure size, but its look is deceiving. I hope it wasn't their best attempt at making a prime rib dip and/or Philly, but if it was, I've had far better! Add some flavor to your meat, trust me, it goes a long ways and it's good thing there was au jus, because it was a little dry as well. Remember our fries dilemma? Well... I probably had three fries and left the rest!

I do have a confession to make and I'm hoping the Executive Chef doesn't get his or her hands on it and ruin it and that's their Shrimp & Sausage Chowder. One of the best soups any restaurant has offered and really the reason why I wanted to stop by in the first place. DON'T screw it up Jake's! My wife and I are and have definitely "moved on to someone new..." and I think the Foo Fighters would agree with me as well. If it's not broken, don't fix it!

Oh shoot, and I really wanted to try this. I'll just watch for your recommendation on another Philly. Thanks!

O'Malley's in Woodbury and Hubert's - Target Center Location are the best!

My go-to lunch meals is their Chicken Chop Salad and Buffalo Chicken Salad which are GREAT!